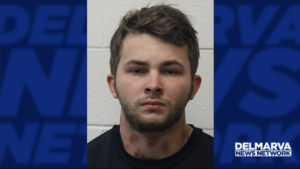 The incident began around 4:15 a.m. when a deputy attempted to stop the driver traveling at 115 mph in a 55 mph zone on southbound Route 13 in Delmar. The driver failed to stop.

The pursuit continued into Somerset County but the chase later came to an end. Later, deputies caught up with the suspect on Route 13 in Delmar where stop sticks were deployed. The driver’s vehicle eventually came to a stop just north of the Delaware line.

The driver has been identified as 18-year-old Joshua Schirling. He has been charged with attempt to elude police by failing to stop, driving without a license, reckless driver, negligent driving and a slew of other charges.

Schirling is being held at the Wicomico County Detention Center without bond pending a District Court bond review.

Maryland Vaccinates Over 80,000 in Single Day for First Time→

BREAKING: Shooting at Military Base in Western Maryland→

Maryland Expands Vaccine Eligiblity to All Residents 16 and Older→